Case Study: Quick deployment to the border ends in a lasting solution

Numerous companies were recently contracted to work along the United States and Mexico border. While drilling into the ground, one of the contractors damaged the pipeline causing an 11-inch hole in a pipe that supplied water from the United States to Mexico. “This water supply was critical to agricultural communities that rely on it to grow food and raise livestock for their families,” said WEKO-SEAL technician Ryan Cooper. The water that passes from country to country is under international laws and treaties, which could have caused a delay in the project’s progress. Knowing this project was of international importance, the contractors scoured the internet to find a company able to seal the hole quickly. Thanks to a solid reputation and the successful installation of over 300,000 seals under their belt, the experts at Miller Pipeline were called to install WEKO-SEALs, their proprietary internal joint seal.

WEKO-SEAL specialists are ready at a moment’s notice to deploy virtually anywhere. Within days of getting the call, the team was able to come up

with a solution and ship the necessary materials to the job site. Once on-site, the team conducted their usual safety assessment of the area for precautions they would need to take. Since they were working in international jurisdiction, Miller employees had to provide government-issued documents to immigration and border patrol before they were able to get their hands dirty.

Together with the contractors, Miller worked to clear and clean the job site for a safe and prompt installment of two WEKO-SEAL internal joint seals. Cooper and another WEKO-SEAL technician, Jeremy Kieninger, made their way inside the 72-inch pipe where they were able to smooth the damaged inside wall to ensure the steel backing band would fit correctly. After fitting a rubber sleeve into place, Ryan and Jeremy secured two 72-inch seals, which they expanded to provide a bottle tight fit. Once the internal hole was secured, the team went to work on the damaged exterior surface. To repair this area, Ryan and Jeremy applied a concrete mortar around the pipe. Once the mortar had cured for about 16 hours, the team was able to verify their work with an air test.

After seeing no evidence of leakage, the job was officially complete. Within a week of getting the call, the WEKO-SEAL team at Miller Pipeline had sealed another pipeline, potentially saving many communities from suffering without water.

Due to a leaky pipe, a large metropolitan city was losing 12,000 gallons of treated, drinkable water every single day. A fix was needed, and fast. Two other contractors, both previous customers of Miller Pipeline, were called in by the city to rectify the problem.

The leak, which presented as a constant geyser visible on the surface to passersby, turned out to be more than just a typical leak.

The city’s water department provides water services to more than one million people over a 650-square-mile area. “Dewatering the pipe to make repairs was not an option. The demand was too high,” WEKO-SEAL Specialist Ryan Cooper said. Shutting down the service line to repair the hole with concrete was time-intensive, expensive, and would have required the city issuing a formal notice to customers that they would be out of water for an undetermined amount of time. Whatever the fix was, it would have to be installed underwater and under pressure.

One of the contractors, a diving company, remembered their previous encounters with WEKO-SEALs and suggested it as a solution. Cooper was dispatched and when he arrived on site he expected to find a leaking 60” pipe as previously diagnosed by the other contractors. Instead what he discovered was not a faulty 60” pipe near the geyser, but a deeper problem: a leaking 84” pipe farther down the line, part of the city’s critical water infrastructure. Cooper alerted the WEKO-SEAL team in Indianapolis of the change and two 84” seals were immediately manufactured and shipped. The new fix was on site and ready to be installed within 24 hours of the diameter change, which saved the customer money.

Thankfully for residents, even this leak was no challenge for WEKO-SEAL, Miller’s proprietary internal joint seal.

Cooper spent time training divers on how to properly install the seal, and the fix was made in a fraction of the time shutting services down would have taken and with immediate results. “It was beautiful, you could watch the geyser go down in a matter of minutes,” Cooper said.

Because the leak was of treated, sellable water, the divers had to undergo a rigorous decontamination process before and after the diving. Cooper monitored the divers’ activity via CCTV on land. Over the hole in the pipe, divers layered 6” eighteen-gauge stainless steel backing plates to provide strength underneath where the WEKO-SEAL would be applied. Then, they took two double-wide seals and staggered them over the hole, providing maximum protection against future leaks.

Forty-five feet below a major U.S. interstate sat a 65-foot deep vault containing a complex system of pipes, valves, and infrastructure for drinking water. For years it worked like a well-oiled machine, until it didn’t. One of the 36” L-shape joints of a cast iron, concrete-lined water main suffered a leak. After other contractors tried various external solutions which ultimately failed, the experts at Miller Pipeline, creator of the WEKO-SEAL internal joint seal, were called in.

Foreman Patrick Whitehead reported to the site and conducted pre-job safety checks then ventured underground and found the leak. This leak was no match for a WEKO-SEAL.

First he prepped the concrete with quick-curing hydraulic cement, then applied a 14” extra-wide WEKO-SEAL. Once the seal was in place, he applied the standard two stainless steel retaining bands and one additional for added stability. Upon completion of the installation, an air test was performed on the seal.

If the customer replaced that segment of leaking pipe, it would have taken days. From start to finish, installing a WEKO-SEAL, guaranteed to be bottle tight, took just over four hours. This created huge cost savings for the customer, and service was only interrupted for a few hours. Contact Miller Pipeline’s WEKO-SEAL team to see how they can help with any repairs on any type of pipe (including compound angles), carrying any product. 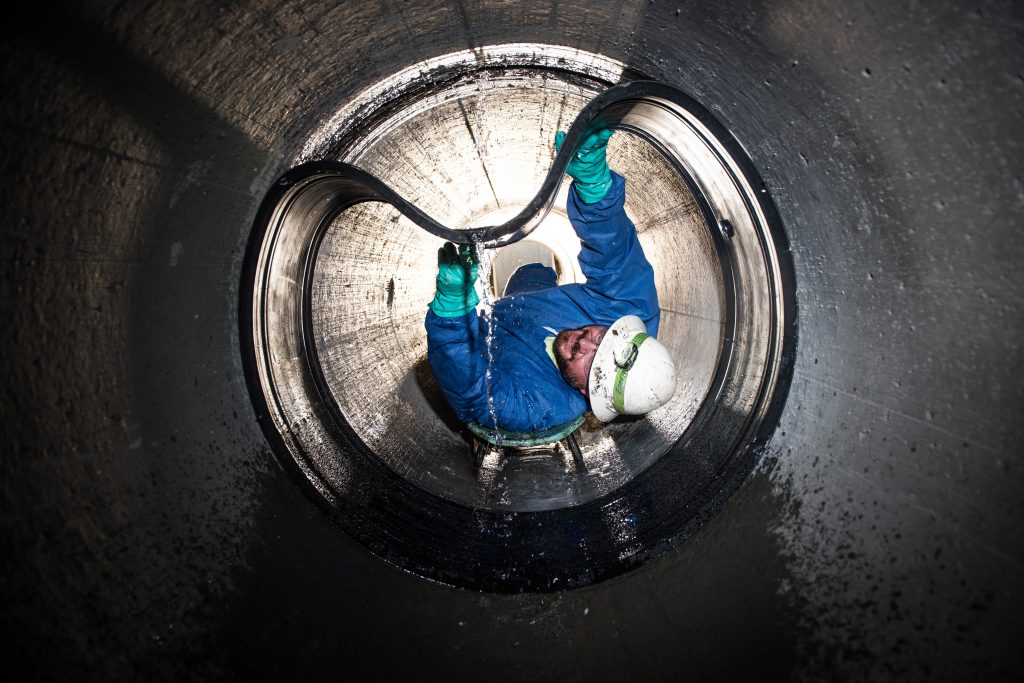 After an application of quick-curing hydraulic cement, WEKO-SEALs are then installed by expertly-trained crews, all confined-space certified and available for emergency calls anywhere in the world.